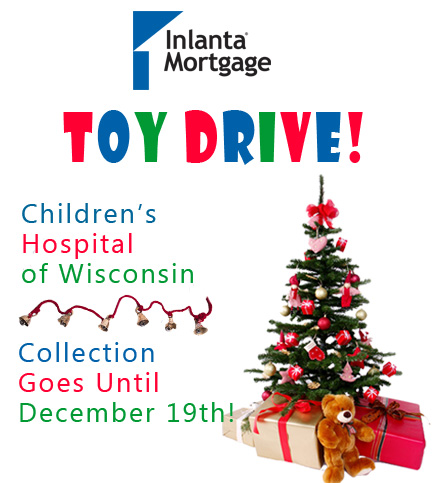 It’s that time of year again!

Last year’s Toy Drive for the Children’s Hospital of South Eastern Wisconsin was such a huge success that Inlanta Mortgage’s Brookfield West branch is doing it again. Your donation of a new, unwrapped toy will make the holidays much more joyful for a sick child. Please consider picking up a few extra items during the course of your regular holiday shopping. These items help the children pass the time and they help to alleviate a bit of the anxiety they deal with on a daily basis!

Cash donations are also welcome.  The money will be pooled and Inlanta Mortgage will do the toy shopping for you!

Don’t have time to drive out to our office?  Shop your favorite online store and have your donation shipped directly to our office. Our address is 611 N Barker Road, Suite 201, Brookfield, WI 53045.

Donations will be accepted through December 10th.

Inlanta Mortgage recently collected over $2300 in donations for Habitat for Humanity at its annual conference in Wisconsin Dells on Monday, August 16. Inlanta sponsored the dunk tank, while employees donated money to have the chance to dunk their fellow co-workers.

“We always try to make our conferences fun, and this year we decided to include a charitable element. The response was overwhelming! Our employees were more than willing to support Habitat for Humanity for an opportunity to soak their fellow co-workers,” said Chief Operating Officer, Jean Badciong.

Inlanta’s main purpose is to provide customers with “Loans for Your Dreams” and Habitat for Humanity follows similar philosophies, which made the decision to donate the funds to Habitat an easy one. Both organizations work to provide housing to families of the areas they serve, in their own way.

“Our goal as a company is to help families achieve the American dream by owning their own home,” said Inlanta Mortgage President, John Knowlton. “We are happy to contribute to an organization such as Habitat for Humanity who is committed to making that dream accessible to more and more families by building affordable housing around the world. Due to the success of this year’s dunk tank, we’ll be sure to include it in future conferences.”