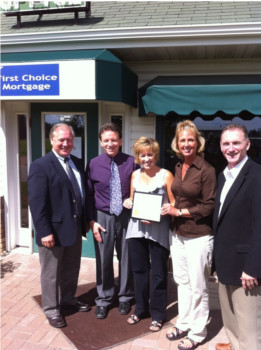 The awards recognize lenders who have made a significant contribution in assisting Wisconsin rural residents achieve the dream of homeownership, in partnership with USDA Rural Development and the Guaranteed Rural Housing (GRH) program. Awardees have utilized in excess of $2 Million (for the Gold) and $1 Million (for the Silver) of GRH program funds in fiscal year 2009 in earning this recognition.

“We’re thrilled to receive this award,” said Badciong. “Our Antigo branch has worked hard to help many local residents achieve their dream of homeownership and is receiving this award for the third consecutive year. This [GRH] program allows our customers in Antigo and throughout Wisconsin to obtain affordable housing, pride of ownership and most importantly helps the communities in which they purchase. Serving rural Wisconsin is a great honor for all Inlanta and First Choice Originators.”

“By working in partnership with lending institutions across Wisconsin, thousands of rural families have become homeowners,” said Gruszynski. “Our partnership with Inlanta Mortgage and our other approved lenders are highly valuable,’ he added, “and we look forward to sharing continued success with them as we provide affordable homeownership opportunities created through our Home Loan programs.”